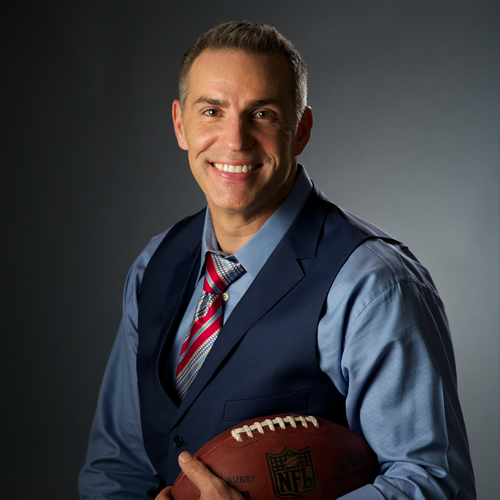 After suffering from injuries and watching from the sideline, Warner was released by the Rams in 2004 and signed a one-year contract with the New York Giants. In March 2005, he was signed by the Arizona Cardinals where most football experts expected him to unceremoniously end his career. In 2007, the veteran signal-caller battled through an elbow injury to begin his renaissance with a passer rating of 89.8. In 2008, he led the Cardinals to their first-ever Super Bowl berth, was voted to his fourth Pro Bowl, and surpassed several Cardinals’ franchise records including touchdowns, attempts, completions, completion percentage, and passer rating.

After a record-laden 12-year career, Warner retired from the NFL following the 2009 season. His post-NFL career is anything but relaxing as he continues to impress with his football knowledge in broadcasting as an analyst with the NFL Network and Westwood One. Warner often captivates crowds as a motivational speaker and in 2010 he joined the cast of Dancing with the Stars – Season 11, finishing a respectable 5th thanks to his charm, competitive spirit, and growing fan base. In 2013 Kurt hosted a new reality series “The Moment” on USA Network. In nine episodes, Warner took men and women on a life-changing journey by giving them a second chance at a career path they never dreamed possible.

In 2013 Warner was nominated for a Sport’s Emmy as Outstanding Studio Analyst for his work on NFL Network. For his role on The Moment, Kurt was nominated for the Critic’s Choice Television Award - Best Reality Host.

Kurt Warner reached the pinnacle of success on the field but, his gridiron accomplishments pale in comparison to the dedication he devotes to the community. In 2001, Kurt and his wife Brenda established the First Things First Foundation, a non-profit public charity dedicated to impacting lives in a lasting way by promoting Christian values, sharing experiences and providing opportunities to encourage everyone that all things are possible when people seek to put first things first.

First Things First has compiled an impressive philanthropic resume blessing countless children and families through the diverse programs of the foundation. A small sampling of First Things First’s outreach includes: hosting annual week-long trips to Disney World for children in medical crisis and their families; rewarding hard-working single mothers who achieve the dream of homeownership; raising over $875,000 for rebuilding efforts after the 2008 Midwest floods; collecting and distributing more than 260,000 coats from an annual coat drive in greater St. Louis; annually delivering more than 100 stockings for a Christmas Day surprise for foster children; providing scholarships to youth groups doing service-based mission trips; and fostering an attitude of inclusion for children and adults with special needs. www.kurtwarner.org

In 2012, Kurt and Brenda founded Treasure House, a Christian-based supported living community for young adults with intellectual and developmental disabilities. Treasure House offers an affordable residential opportunity to cultivate independence with the appropriate resources. The first community opened in the Phoenix, AZ area in 2018 with a vision to expand to other communities. www.treasurehouse.org

Warner’s off-the-field accolades include the Walter Payton NFL Man of the Year, The Good Guy Award from the Pro Football Writers Association, USA WEEKEND’s Most Caring Athlete, ABC World News Person of the Week, Forbes Magazine-America’s Most-Like Sports Figure, Sports Illustrated-Best Role Model, and the Bart Starr Award. In 2017 Warner was given the ultimate praise in professional football when he was inducted into the Pro Football Hall of Fame.

To encapsulate all of this, Warner inked a deal with Lionsgate Films to bring his life story to the big screen with producers Kingdom Studios at the helm. The movie called, American Underdog: The Kurt Warner Story, will be released in theatres December 2021.

Coming soon Warner will be launching a teaching/instruction platform called QBConfidential (QBC). This will be a video based/membership only website that will delve into the various aspects of learning, viewing, and coaching the game of football. It will feature video tutorials from Kurt on X’s & O’s, mechanics, mindset, play calling, leadership and more. Go to @QBConfidential on Twitter/IG and Facebook for more information.

We use cookies This website (and some of its third-party tools) use cookies. These are important as they allow us to deliver an exceptional experience whilst browsing the site.